“Don’t let anyone who wants to practice harsh self-denial and worship angels rob you of the prize. They go into detail about what they have seen in visions and have become unjustifiably arrogant by their selfish way of thinking. They don’t stay connected to the head. The head nourishes and supports the whole body through the joints and ligaments, so the body grows with a growth that is from God” (Colossians 2:18-19 CEB).

These verses remind us that there are only two kinds of spiritual beliefs: true and false. For instance, a person who is connected to Christ and looks to Him for guidance and direction through His Word is someone who is most likely to enjoy true spiritual health. But those who disengage from Jesus are vulnerable to any number of spiritual fallacies.

“Anyone who goes beyond Christ’s teaching and does not continue to follow only his teaching does not have God. But whoever continues to follow the teaching of Christ has both the Father and the Son” (2 John 1:9 NCV).

These Scriptural admonitions warn us to avoid those who maintain a veneer of Christianity in relating their “visionary experiences” but are detached from Christ in reality. Consider the following observation from one commentator: “Like virtually all cults and false religions, the Colossian false teachers based their teaching on visions and revelations they had supposedly received. Their claims were false, since Jesus Christ is God’s final and complete… revelation to mankind (Heb 1:1, 2)” (1) 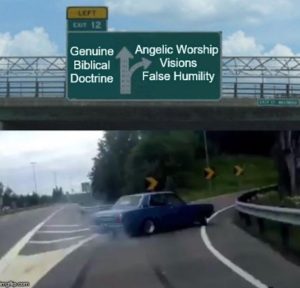 Much like a motor vehicle that takes the wrong exit, it is possible to leave the road of genuine Christianity in favor of a belief or teaching that carries little or no Scriptural support. However, if we stay within the boundaries of clear Biblical teaching, we can minimize the potential for spiritual deception. With this in mind, we can ask three important questions in seeking to determine if a spiritual belief or practice is Biblically valid…

If the answers to those questions are “no,” then we would be well-advised to exercise caution. Otherwise, we might find ourselves engaged with those who are “…inflated by empty notions of their unspiritual mind” (CSB).