“For Jesus has been counted worthy of more glory than Moses–as much more glory as the builder of a house has more honor than the house itself. (For every house is built by someone, but the builder of all things is God)” (Hebrews 3:3-4 ESV). 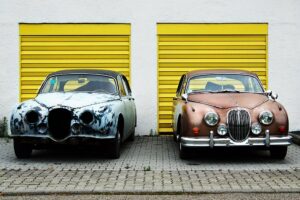 Many of us enjoy the satisfaction that comes from the act of restoring, rebuilding, or refurbishing something that has fallen into disrepair. Such opportunities might include a vehicle that has been restored or customized, a home improvement or restoration project, or anything that has been re-purposed into something of greater value.

It’s hard to improve upon the feeling of achievement that accompanies the successful completion of a project that restores an object to its former glory (or something greater). In such instances, the person who serves as the builder, customizer, or restorer justifiably receives greater recognition than the project itself. This idea is true in a spiritual sense as well, for as Hebrews 3:3-4 tells us, “Jesus has been counted worthy of more glory than Moses…” as the builder or architect of God’s house.

This returns us to a theme that the author of Hebrews introduced in the first sentence of the first chapter of this book: Jesus is the agent through whom God established the cosmos. He is the one who created the universe and all that exists within it, known or unknown. The New Testament letter of Colossians builds upon this idea in telling us that all things were created by Him, through Him, and for Him…

These passages focus our attention upon something that is greater than the attitude of respect we should hold for the architect of all things (although it certainly encompasses that). As one commentator explains…

“The thought expressed is a teleological thunderbolt; it is the ancient and indestructible argument from design, bluntly and unequivocally stated, first in the truism that every house has a builder, and secondly in the deduction that the far greater house of the whole universe likewise has its builder who can be none other than God.” (1)

We’ll examine this reference to that “teleological thunderbolt” and discuss its implication next.