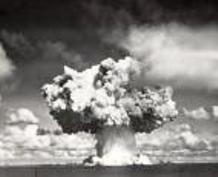 The results of The Doctor’s most recent experiment

Yes friends, it’s time once again for The Doctor to issue another report from deep within the confines of his secret underground headquarters. Here within this secure location, The Doctor remains busily at work on a number of important research and development projects.

While many of these projects remain highly classified, The Doctor can report that one involves the development of an exciting new technology: a multi phase ionic plasma disruptor cannon for use against those pesky rodents like the ones that keep getting into Grandma’s garden and wrecking her tomatoes. Plus, it also has a really neat cup holder and a handy storage compartment for your iPod too!

Anyway, let’s take a look at the following email while The Doctor tries to find another place to live…

"is it unGodly to listen to secular music as long as it doesn't cuss, or sing against God or sing about sex? ...i think thats okay but my friend said that since we were created to worship God we should only listen to music that was made to worship God. so i just want to make sure on that"

OK, there are a lot of different things to think about in answering this question so let’s take them one by one. First, by “secular music,” The Doctor is going to assume that we’re talking about any kind of music that is not specifically designed to exalt or praise God. In other words, we’re talking about music that has not been written or performed with the definite idea of honoring or worshiping God in mind.

Now the easy answer to this question is to automatically agree with your friend and say that all Christians should only listen to music that’s made to worship God. However, let’s think about what it would mean to really follow a standard like this. For example, if people only listened to music that was specifically made to worship God then Christians could never listen to most classical music, instrumental music, or jazz.

If you really want to get technical about it, we could even go so far to say that this standard  would prevent people from singing or listening to a song like “Happy Birthday To You” since it doesn’t fall into the category of “worship music.” Even the person who is really, really against listening to non-Christian music would probably be reluctant to say that it’s wrong for Christians to listen to classical music or sing “Happy Birthday…” So The Doctor would say that it’s tough to make a case that it’s wrong for Christians to listen to anything but “worship music.”

However, we also have to recognize that Colossians 3:16 tells us to “Let the word of Christ dwell in you richly… as you sing psalms, hymns and spiritual songs with gratitude in your hearts to God” (NIV). This Scripture tells us that your friend is definitely right to to place an emphasis on listening to music that is made to honor God. In addition, 1 Corinthians 10:31 also says, “…whatever you do, do it all for the glory of God” (NIV).

This means that the person who feels that they can’t listen to a song, band or style of music “to the glory of God” shouldn’t do it. So you can see that this question is not so simple to answer and it means that we should step back and use some principles from the Scriptures to help make good decisions in this area.

First, we know that Bible’s book of 1 Timothy tells us that God has given us all things richly to enjoy (1 Timothy 6:17). “All things” would certainly have to include music that doesn’t promote any ungodly lifestyles or ideas. We also have the example of the Apostle Paul that is recorded for us in Acts 17:28. In this passage, Paul quoted from the work of a non-Christian poet which means that he had read or at least heard the writings from this secular artist. So again, in light of these Scriptures it seems hard to make the case that Christians should only listen to worship music 100% of the time.

That being said, The Doctor strongly believes that it’s extremely important to be selective about the music that we listen to. For example, many artists make fantastic music but lead very ungodly lives. It’s important to draw a strong line between enjoying and appreciating someone’s God-given musical talent (which is a gift that we can honor God for) and supporting or imitating that person’s lifestyle. By the way, this idea also holds true for all artists whether they are musicians, performance artists (like actors and actresses) or involved in fine arts (like painters and sculptors and so forth).

Because of this, The Doctor believes that it can be possible for Christians to honor God and enjoy the skills and talents that He’s given to certain musicians even if they produce music that is not specifically “Christian” or “worship” music. But how can you know the difference between music that’s OK to listen to and music that’s not? Well, now is probably a good time to talk again about the factors that go into deciding what music is “good” and “bad” to listen to. To accomplish this, try asking yourself these questions…

If you get some negative answers to these questions (even a few) then it’s probably not a good idea to listen to that song or band. It’s also important to be sensitive to others who may not agree with the idea of listening to any “nonchristian” music. For example, your friend believes that people should only listen to music that was made to worship God, right? Well, that decision clearly honors God and The Doctor believes that you should respect and be sensitive to that decision.

“You may know that there is nothing wrong with what you do, even from God’s point of view, but keep it to yourself; don’t flaunt your faith in front of others who might be hurt by it. In this situation, happy is the man who does not sin by doing what he knows is right. But anyone who believes that something he wants to do is wrong shouldn’t do it. He sins if he does, for he thinks it is wrong, and so for him it is wrong. Anything that is done apart from what he feels is right is sin.”

This means that even if you believe that it is perfectly OK before God to listen to a particular song or artist or style of music, you have to to be considerate of others (like your friend) who may not feel the same way. On the other hand, your friend should not look down on someone like you who feels that it OK to listen to non-worship music as long as it meets certain strict standards. Finally, everyone should keep Romans 12:10b in mind which tells us that we should “…give preference to one another in honor” (NAS).

Now before we wrap this up, there’s one more thing that The Doctor would like you to think about. Remember that musicians make their living by creating and selling their music to people who are willing to buy it. So whenever someone watches a music video, or streams, purchases, and/or downloads a music file they are effectively telling the person that made that song or album that they support their music and that they want them to make more of it.

This means that the money that someone spends on music is like a vote for that music and that musician. If you ask yourself, “Is it right for me to support this person and their music?” when deciding what to listen to then it should certainly help you make good, God-honoring decisions in this area.

Sex And Violence In Movies, Music And Games

Do you have a question for The Doctor? Just send it to the email address above- you’ll get a personal reply and you just might see it answered here.

Mailbag XIX was last modified: October 25th, 2017 by The Doctor