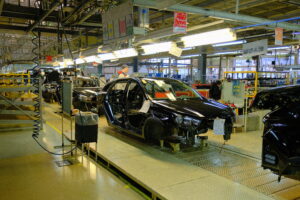 When an automotive manufacturer produces a new automobile, the first vehicle in the assembly process is labeled “Job 1.” Paul the Apostle made a similar designation earlier in 1 Timothy chapter one when he identified the presence of false teachers within the church at Ephesus. For Timothy, the first order of business in Ephesus involved dealing with the heretical teaching that had found its way into the church.

Here now in 1 Timothy chapter two, Paul will instruct Timothy in the proper way to build upon Job 1…

“Therefore I exhort first of all that supplications, prayers, intercessions, and giving of thanks be made for all men, for kings and all who are in authority, that we may lead a quiet and peaceable life in all godliness and reverence” (1 Timothy 2:1-2).

The next step in that process involved prayer. In fact, the need for prayer was so critical that Paul considered it to be something of primary importance. However, Paul did not seek to limit his prayers to church-related matters. Instead, he included governmental leaders in his focus of attention.

Before we consider the elements of prayer within this passage, we should pause to consider these verses in light of the political environment of that era. The Roman Empire controlled most of the known world in the latter half of the first century and implemented several policies that impacted spiritual observances during that era…

“The Romans permitted subject peoples to worship their own gods, but they had to show their loyalty to Rome by also worshiping the goddess Roma and the spirit of the emperor. Because Jewish people worshiped one God to the exclusion of all others, Rome allowed them to pray and sacrifice for the emperor’s health without praying and sacrificing to him. Prayers were offered for him regularly in the synagogues, showing the loyalty of these Jewish institutions to the Roman state.

When the Zealots decided to throw off the Roman yoke ‘for God,’ however, they abolished the sacrifices in the temple. This act in A.D. 66 constituted a virtual declaration of war against Rome, several years after Paul wrote this letter. Christian public prayers for the emperor and provincial and local officials showed Christians as good citizens of the society in which they lived (Jer_29:7). Paul’s motive is more than keeping peace (1Ti_2:2); it is also to proclaim the gospel (Rom_2:3-4).” (1)

We’ll return to this subject again in an upcoming study. For now, we can say that 1 Timothy 2:1-2 reminds us to pray for modern-day governmental authorities, especially those who may be indifferent, averse, or openly hostile to Christianity.

1 Timothy– Chapter Two I was last modified: November 2nd, 2020 by The Doctor