“Now when this epistle is read among you, see that it is read also in the church of the Laodiceans, and that you likewise read the epistle from Laodicea” (Colossians 4:16). 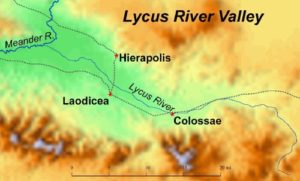 The city of Laodicea was located about ten miles (16 km) away from Colossae. Together with the neighboring city of Heirapolis (mentioned earlier in Colossians 4:13), these cities represented the three largest metropolitan areas in that region. Unfortunately, it appears that the false teachings Paul the Apostle addressed earlier in this letter had likely spread to the Laodicean congregations as well. That might explain why Paul wanted the Laodiceans to read this message to the Colossian church.

But what became of the “…epistle from Laodicea” mentioned here? While we have the ability to read Paul’s letter to the Colossians as part of the New Testament canon of Scripture, it seems that this letter to the Laodician church no longer exists. The question is, why?

We might find one possible answer in God’s intent for such material. You see, its possible that certain apostolic letters may have been intended for a limited audience consisting of a local church (or group of churches) at a specific point in history. Its also possible that Paul did not write anything specific to the Laodiceans at all. Notice that Paul asked the Colossians to read the letter from Laodicea and not his letter to Laodicea. A letter coming from Laodicea might represent a different Biblical epistle, like a circulating copy of Paul’s letter to the Ephesians for example.

“Paul refers to a previous epistle he ‘wrote’ to the Corinthians which is not in existence. But since it was written by an apostle to a church and contained spiritual and authoritative instruction, it must be considered inspired. This raises the question as to how an epistle inspired of God could be allowed by Him to be lost…

First, it may be that not all apostolic letters were intended to be in the canon of Scripture. Luke refers to ‘many’ other gospels (1:1). John implies that there was much more Jesus did that was not recorded (20:30; 21:25). Perhaps this so-called ‘lost’ letter to the Corinthians was not intended by God to be collected in the canon and preserved for the faith and practice of future generations, as were the 27 books of the NT (and 39 of the OT).” (1)